Things that I do not care for.

Sometimes, I get to feeling way too chipper about life and stuff, so have to bring myself back down to reality by dwelling on stuff that I simply don't care for.  Not that I HATE these things, for hate is too strong a word (and, frankly, is one of those things I don't care for), these are just some things that if I never had to deal with them again it'd be fine by me.

- Mis-use of 'less than' when 'fewer than' is correct.

- The gunk that gets caught in the kitchen sink drain.

- Bunched-up socks (because of this I rarely wear socks anymore).

- Liquor in my coffee.  Irish coffee?  A little Bailey's?  Some peppermint schnapps in there?  Ptoooey!

- Waking up too early on weekends.

- Food that grows in your mouth the more you chew it.

- Ingrates who do not return their shopping carts to the buggy corral.

This list is of course not exhaustive, but certainly does capture what rises to the top of my 'meh-o-meter' at the moment.  I could add 'inconsistent use of punctuation' on the list, or 'too salty food' or 'willful ignorance' to the list, but perhaps another day.

Note I mentioned drama in the list.  Not 'dramas,' which are very different and can be enjoyable especially if they are set sometime back in history or maybe the distant future.  No, I'm talking about DRAMA, the manufactured sort that seems to keep some people's clock ticking and without which they might just not have a reason to breathe shallowly and rapidly, ever again.

You can just leave that shit at the door if you're going to walk into my house.  Got no time to spend on manufactured angst.  World's got enough to deal with without all that mess.

While I'd ask readers of this post to comment on things they don't care for, there aren't many readers left so won't obligate the few of you who do idle by here to contribute.  But if you want to, hey - you know what to do.

I copy one of the greats, if pompadours are your thing.

So, this one's mostly more hair and nails.  You excited?  You ready?  Then let's dive in, but not too steeply, because this is kind of a shallow pool of topic and you don't want to mash your noggin on the bottom.

I put this photo on FB recently, with the statement that this is what my hair looks like right now, which is about 7.5 months after it started growing back: 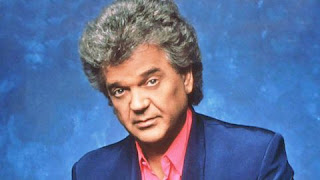 No word of  a lie, folks.  This is my current hair reality.  Now, Mr Twitty, seen above, had sported some magnificent pompadours in his time, but this iteration is the most natural one I've seen on his head.  I guess that once you get famous, certain visual cues are no longer necessary?  Make sense to me.

Anyhow, what he's got in that pic is pretty much what I've got, right down to the color and texture.

It's good to know that even fancy rich fellers have trouble with their hair from time to time, just like regular folks.

In the nails department, I'm facing the fact that I'm going to have to cut them back a touch if I don't want to turn into some ninny-fingered prancy lady.  You know the type, what with the clicky nails on the computer keyboard, the weird sideways finger positioning when opening a poptop can, the odd splay-hand manner of dealing with produce bags or doors, that kind of thing.

These were them about a month ago.  I realize they are not cardi b-type talons, but to me, these are LONG.  They have grown since then (OBVIOUSLY, as I haven't trimmed or filed them in the interim): 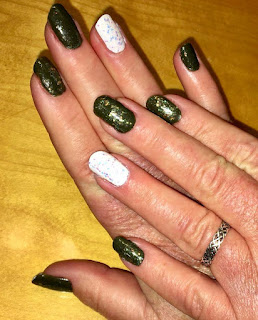 I do like having the longer nails, but they are getting in the way.

And starting to get little splits in them, which need repair.

BUT, I keep letting them grow, and continue to repair the splits with bits of TP and base coat, then doing a full manicure to ensure the coast of polish will keep the nail from further splitting.

I kind of don't know who I am anymore or how to behave with these things.  I hope it's not too late to learn.

In other news, and ignoring the hellscape that was the attempted coup here in the USA a little while ago, we are moving out of our bedroom and into the other bedroom so as to tear apart the old bedroom to put a new addition on it that will include a fancy new closet and what will be bathroom #2.  Such excite!

Except holy shit these was a lot of stuff in our bedroom.  And closet, because that's getting a facelift too.  Like, YEARS of stuff, stuff we'd forgotten we had, stuff that might have once had meaning to us but we no longer know why, stuff that has disintegrated in the decade since it was shelved and forgotten, stuff that we really ought to have been using all this time (hello, French Horn) but have not.

It's a grueling and somewhat embarrassing process, this sifting and winnowing.  Not to mention dusty, dirty, sometimes moldy.  So MUCH is getting donated, so MUCH is getting chucked out.  On occasion something is unearthed that bears remarking upon and relocation to a spot for safekeeping, but those moments are not as frequent as the 'just get rid of it' moments.

A terrible job, but in the end we're going to be many pounds of stuff and dust lighter when we're done, and for that we give thanks.

I'm still here.  Still a work-at-home corporate denizen pounding the keyboard for a day's pay.  WITH NO COMPLAINTS.  After the absolute shitshow that was 2020 for a lot of people, I really need to keep my mouth shut about getting to work at home full time and the bennies that come with company employment.

Like, healthcare, which meant that in 2020, through all the excitement of cancer therapy and a random appendectomy (plus other joys) we didn't go broke paying for healthcare.  I wish that was true for everyone.

My fingernails, which all fell off thanks to chemotherapy, have grown back into frigging DAGGERS that I think I'm going to have to buy a tiny hacksaw to trim.  They're ridiculous, and they're still growing.  They click when I type.  Not sure how I feel about that.  They do look pretty all manicured, so that's new.

Also, Christmas lights from some folks near us who really do it up near us.

It's 'dry January' for me, because why not?  If amazing things happen it might be a Thing to carry forward longer.  As if that would be a bad idea.