To wrap up my chemotherapy journey, here's a bit of background -

I was diagnosed with estrogen- and progesterone-positive, HER-2-negative breast cancer in September of 2019.

I had a lumpectomy and sentinel lymph node dissection in October 2019, and a power port placement in November 2019.

This is my treatment regimen, once every 3 weeks:

Translation of brand names to generic:

Common effects of this treatment regimen for me have been:

Oh, and my fingernails are in the process of falling off.  This is common and is the same as hair loss, which is an expected effect of both Taxotere and Cytoxan.  I expected the hair loss, but  was hoping to keep the fingernails.  No luck.  Oh well.

All in all, while chemotherapy isn't something I'd wish on anyone, it wasn't so bad and certainly a better experience than I would have had a few years ago.  Treatment options and medications have improved since then.

That's it.  One for the memory books, that I probably won't whip out for the grandkids.

Chemo's over. Done with. I hope I never have to go back.

The last PLANNED one,  I should say, because never say never when it comes to that rat bastard cancer.  That's a bet you shouldn't hedge.

So yup - last one.  The process went well, as usual, with supportive nurses and The Comfy Chair (I never did use the massage function), and Biff the Bagel-Getter.  We were lucky, today is the last day they're allowing visitors in the ward.  Tomorrow I would have been without a delicious breakfast bagel unless I went before the appointment!

After I was unhooked from the machine and was getting ready to go, all the nurses came over with noisemakers and harmonicas and shout-sang 'For She's a Jolly Good Fellow!' with gusto, right at me, then gave ma graduation certificate and a bag full of what I think is Aveda body lotions and stuff that volunteers make to hand out to us graduates.  Pretty neat, and I apologize to anyone on the ward who was trying to catch a few winks as I was leaving.  I hope it's your turn to be feted really soon.

Pretty happy about that.

The one with all the nausea 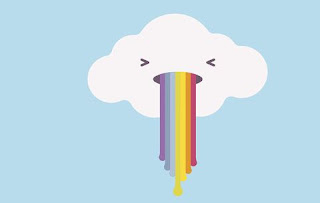 It's caught up with me, the chemo has.  Four rounds of it and I didn't really experience many issues, but that fourth round, the one that saw my neutrophils plummet and got me on an antibiotic and made my fingernails hurt?  THAT one set me up for some later-stage nausea that just Would. Not. Go. Away.

I did not take medication for it, being the fool I am, even though I've had the medication at the ready since chemo started in December.  Didn't really 'feel bad' enough' for me to put yet another chemical in my body.  Powered through, like we're all supposed to do.

Then came round 5, which started out fine but then my fingernails started to delaminate (at least I THINK that's what's going on, as the nail bed is turning white from the tip toward the base and it feels like they are separating from the finger itself but I'm not testing that theory too much because it's gross and I'm not about the life right now), and I have had some muscle aches (likely from sitting around all day), and then, a few days ago, the nausea struck again.

Oh the nausea.  I'm OK-ish in the morning, but by mid-afternoon I'm praying that my stomach would just go ahead and heave already to satisfy whatever demon has poking my vagus nerve and playing the world's WORST game of 'tickle fight' that invariably ends up with my face in a trash can, coughing and heaving and crying and blowing snot.  It's not a great look, and it feels even worse.

What prompts me to write this is that I just had an attack a few minutes ago.  I'm sure it was great fun for Biff to listen to, what with all the choking and gasping and shit.  Thankfully, nothing generally comes UP, so it's just a lot of terrible noises and some sweating going on, but still, there's no good way to puke, is there?  Heaving brings momentary relief, but only momentary.  It may come back, certainly by tomorrow.  At this point I have to admit defeat - chemo has gotten the best of me, and I'm quickly giving up even some 'not-great' parts.

Time to go bust open that bottle of pills.  Idiot no more.  I'm going to chase that fricking demon out and grab back some goodness in my current living situation (such as it is with all the coronavirus sequestering going on.  I don't leave the house much/at all right now, being as how I don't really relish the notion of heaping a potentially deadly respiratory infection onto my current list of issues).

Silver Lining: Final infusion is in 2 days.  Praise be!