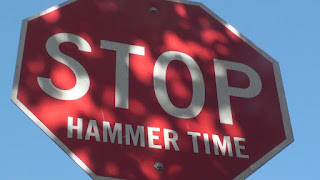 Folks, we need to talk about a few things.

Using these two phrases, for starters:

'Took a turn for the worst'

Because, really, it's presumed that (unless you're a non-native English speaker) you have come into contact with a variant of these turns of phrase before, and at that contact it's likely the phrase was being used correctly.  Perhaps I am wrong in this, but I'll bet not.  The use of these phrases MUST be stopped.

They are, in correct form, as follows:

'Took a turn for the worse'

'All of a sudden'

Please take note and endeavor to use them in their proper form from this point on.

Also, if you would be so good as to cease being exclusionary, purposely ignorant, hateful, judgemental, violent, manipulative, and/or close-minded.

Instead, try being these things:

It might seem weird at first, but once you get some practice in I'll bet you find that you're a lot less angry and defensive.

One last thing (this is for anyone who works in a cube farm): if you are having a conversation in your cube with someone, either on the phone or in person, please, for the sanity of all around you, do NOT drop your voice to a whisper just as you're getting to the juicy parts of what you're sharing.  It's really super-annoying and makes some of us get a little stabby.

If you KNOW you're going to 'go there' in a conversation, either take it to a meeting room or save it  for instant messaging.  Because that would be the kind and least distracting thing to do, and might save you from being impaled by a plastic cafeteria knife.

These message brought to you by someone who clearly has some 'issues' with people lately.

Part of why I don't love my job is that there's a LOT of training involved.  Like, a lot.

I also don't like having to follow the rules, like ever, but must adhere to The System where training is concerned or the folks in the Upper Offices get notified and I would get called on the carpet, which I like even less than following the rules, so follow them I do.

Therefore, I do the damned training.

This morning's offering was along the lines of 'How we made your job easier by introducing new steps in the process and multiple new forms to fill out, plus make you do more of the work other people should be doing.  Amen.'

What, that doesn't make sense to you?  Welcome to Corporate America, my friend.

Oh sure, it's padded with little items like 'we now provide a fully hyperlinked document for you to check, so now YOU check it instead of that dude in India,' which isn't as fun as it sounds (!) because the type of document we're talking about can have thousands of pages and multiple thousands of links to check, and did I mention I'm not all that hot on detail work either?  Of all the things I don't care for at my job though, detail work, especially QC work, is my least least favorite, and sometimes I enjoy it, but THIS kind of detail work is mind-numbing.  Oh, and then we need to complete a form that says 'I checked it, it's FINE,' which if it turns out things are NOT actually fine when it comes time to submit the thing, will bounce back at the sign-ee like an angry toddler on a trampoline.

But I digress.  Back to the training - -

Normally, intructor-led training is more entertaining than the canned slide decks or recorded sessions in which the same smiling lady is used to present a wide variety of topics (eg, 'Marcy' in one training is 'Lucy' in another and she wears the same clothes and holds the same poses, because why pay for another set of stock photos when you already have The World's Stiffest Spokesmodel on hand?).  Instructors can do that little interaction thing, and sometimes can inject a little humor, right?

Well, notsomuch today.  Sure, there were humorous things that happened, like that long space of dead air while the nice fellow swooped around a long document looking for his one example of a broken link (so he could show us what one looks like), a time during which I may have hoped that the connection to the meeting was irretrievably broken, and that awkward giggle when the other instructor fished around for a way to say "I don't know" to a good question, but otherwise this one was pretty dry.

It had to be, because they rip-raced through absolute PILES of material, barely mentioning stuff that's pretty important. THEN they had the nerve to tell us that the meeting would end 25 minutes short of the scheduled hour, and I had to wonder why they glossed over so much if they KNEW the presentation only goes 35 minutes.  Seriously.  If  I'm going to not do actual work and instead go to a training, I want that training to last the full allotment of time instead of 'giving me back' 25 minutes of my day to, ostensibly, DO WORK. That's just a terrible trick to play on someone, wouldn't you agree.

So, yes.  Thanks for that trainers for all that "time back" hooey, but I played a trick on you.  I didn't work at all.  I wrote this post instead.

So I'm putting his picture on the internet instead.

Years from now it is likely that the furore being experienced in the hearts and (I guess they are) minds of some folks is going to seem quaint and adorable by most of the people who are still around to remember this one earth-shattering thing that has happened that can now never unhappen:

OMGOMGOMGOMG!  Where's the bomb shelter?  How do I protect my children?  What has this world come to that a man's man like Bruce is now a lady named Caitlyn?  It's an outrage!!  He can't be a she!  He's a he and he needs to be a he because if he is now a she then all my teenage broodings over how great a 'he' he was are now in vain because he was living a lie and liars are sinners and sinners go to hell and in my Heaven Bruce Jenner should be there gleaming like the god he is, medals around his burly neck and his glorious hair blowing in the celestial breeze!  Damn!

Who wants to be a LADY, for crying out loud?

I am a lady, who never really felt all that 'girly.'  Don't think that makes me less of a lady because I tend to not think like one.  Does that make me a boy?  No.

I have a sound mind, a strong one, even, and while I don't tip around in girly acroutrements and preen over hair and makeup or get tall worked up over the newest fashions and manicure styles and Who Has The Biggest Diamond, I can be as much of a lady as the next man.  Or female.  I don't think it's about the outside as much as the inside, in other words.

I am a lady, who often feels much more like a guy.  I'm basic, simple, and now that I'm old I have much less drama and hormones to flood my physical being with what was chromosomally determined at conception, I have pared back to what I believe I really am, which is a PERSON.

Imagine.  Wanting to be the person you are.  What nerve.

Well, Caitlyn (nee Bruce) Jenner has been trying to be what she isn't for well over 30 years.  THIRTY.  Let her have a moment when she feels just right in who she is, even if the plumbing might not match the rest of the remodel.  Who gives a tiny crap about something as insignificant as that, when someone can finally say something as banal (to me) as 'hey, I like jeans and a tee just fine, no need for pantyhose and perfume here,' or, more likely, 'I like me in a dress and heels and big hair like Julia Roberts in Steel Magnolias.'

Word: It's not the end of the world.  This transitioning doesn't reflect on YOUR gender situation (unless it does, and then I hope in some way what is happening right now helps you).  It's not as though this sort of thing has never happened before.  This is not the first time.  It's HER first time, though, and I think that while it might be confusing and strange and really uncomfortable for some folks, in the end it's about finding what make a person comfortable and at  peace that matters, and not what they wear or who they are becoming, or have become.


It's just not that huge a deal, except for him.  A little support would be great instead of a heaping helping of obnoxious bullying and creepy innuendo (Mike Huckablech!).

God.  Give me a spirit of graciousness and understanding in this moment.  Remind me to be civil and not fan flames of hatred and discomfort.  Let me be the open arms, the understanding heart, the sought-for peace.