Smells like ashwagandha up in here (or is that the passionflower)?

For too many years now, I've been trying to tough out anxiety.  Mind over...mind, I guess?  When you KNOW something's 'all in your head,' it gets tough to pit the brain against itself, because the brain will always win, which isn't fair or nice to the losing side.

Things that make me anxious are:

I can't pinpoint WHEN precisely this started, but it was manifesting right around the time menopause had truly taken hold and my body was working on a whole different hormone system than it was used to for 40 years.  Even something like a nice boat ride on the lake to go get lunch with the family would get me going.

Somehow it seems that my vagal nervous system detects the stress and gives my body something to DO about it, which in my case is puke, or at least spend some quality time dry-heaving as a potential way to tell the brain 'there, I think we have gotten rid of the bad thing that's making you feel bad.  Can we go do something fun now?' and that kind of worked for a few years.  A crap system, but one that worked, kind of.

As time went on, though, the issue (ha!) became more frequent, not helped at all by the development of what may be Meniere's Disease (though we're not yet sure of what's going on with my vestibular system) which is ANOTHER source of stress more powerful than the items in the list above. Adding vertigo to the mix was powerful bad.

Obviously, I needed help, beyond grounding/counting activities or getting outside and being in nature.  Spending the day agitated, dizzy, nauseated, and with my head in a trash can is no way to go through life.  It also, not surprisingly, prohibits one from 'getting outside in being in nature,' in case you were wondering.

At first, I signed up for online mental health support offered by the company I work for.  Very helpful for those grounding/calming tools that can help self-identify triggers and get the brain focused on something other than the trigger, right in the moment.  Not enough to banish the issue, but enough to get over it, momentarily.

Then, some nerve-calming yummy gummies were brought in to play.  Lemon balm, natural remedies, etc.  Good news - they seem to work.  Tried a couple of varieties, with the same ingredients by and large, and the calming effect is noticeable (currently using the OLLY brand, which I bought online but I believe are now in CVS stores and presumably other pharmacies). Can recommend.

Then, I saw an ad for 'nerve patches' that were getting good reviews online, so I bought some of those for extra-horrible days.  Full truth - I have not yet used one, because I'm a little intimidated by the full power of one patch, but having just read that they can be halved or even quartered depending on the dose needed, I'll be busting them out this week to handle what promises to be a VERY DEEPLY challenging work week.

Here's hoping that at least I won't have to work with a trash can in my lap, as it has potential to mess with the acoustics of team meetings.  Nobody wants to hear that mess going on.

Next is to figure out the whole vertigo thing, because that's not normal.  And so, we press onward and hope for a simple, manageable, explanation.

P.S. - I know the photo above is quoting a verse that is meant to be encouraging (Phillippians 4:6).  Let me take it the wrong way, just this once, mmkay?


It is now nearly 5 a.m.  I have been awake since 4.  This is the new me, I suppose, awake in the middle of the night, trying to get sleepy enough to go back to bed to catch a few winks before having to be awake to monitor the progress of another day.

Thank the good Lord above for being able to work from home.  I'd be a wreck if I had to commute.  I did that for years and years and really got well tired of it by the time I switched jobs, following the money and the comfy work environs of my own bedroom.  Three steps to the desk, no shower required.

(Just a tip: don't ever live west of where you work; you'll be battling the sun both ways if you have to commute.)

If historians are to be believed, my new sleep pattern is matching up to the typical human slumber cycle of yore, which consisted of a few hours of shuteye, then a couple of hours of being awake, then a couple more hours of nap before really getting going for the day.  Maybe though, that's 'typical' for nobles and gentry only, as I'm guessing that kitchen maids and farm hands and such just took one heroic sleep and got up at o-dark-thirty to get on with what needed to be done while the upper crust in the fancy sheets (SHEETS!  What luxury!) caught up on their beauty rest after writing a few letters to their buddies or whatnot at 3 a.m.  I don't know what they did in the MOTN, but it wasn't sluicing the pigsty or making garlic knots like the hoi polloi, I'm betting.

This whole being awake when I'd rather be asleep is why (in part) I signed up for an online newspaper subscription to a nationally-known entity.  While waiting for something soporific this way to come, I  catch up on what's going on in the world, picking my way around agitating issues and lulling my brain with the softer side of life.  Hard news is digested in the hard light of day, early morning calls for recipes and vacation ideas.

It's just what happens. No sluicing required.

After I catch up on social media, comics, dumb games, email, and such, of course.  Just being honest here.

I need a hobby, I think (Tales of the lonely pilot's wife)

Recently, through a tons of hard work and want-to, the LOML became A Person of Worth at a place that is paying him money to be smart, well-spoken, managerial, and competent.

It's not what he's worth, to be sure, but it's enough to keep the lights on.

Which is good, because he works a lot and I'm turning on lights well before he gets home most nights, even though it's only not even mid-September and he left for work at 6:15 this morning, and...you get the drift.

Which is, I'm spending too much time by myself, at home.

Making me realize how MUCH I rely on his company and entertainment of an evening, and just how very boring I am without that company and conversation.

I DO NOT BLAME HIM FOR CHASING HIS DREAMS.  I blame myself for being too damned boring as to not have had anything more amusing to do/develop/depend in these last number of years than social medial and YouTube.  It gets old after a while.

And some things I am NOT going to put on social media, beyond the confines of what we used to consider it be, which is this, right here, da blahg.

Here's the thing about what I'm doing now to kill time: I use my eyes too much.  I devour information and consume, consume, consume, but do NOT create.  My hands itch to draw, my fingers want to write (oh, sure, brain too), my feet and legs want to stretch and MOVE.

Having insomnia might be useful, as by and large these are quiet pursuits.

Maybe tonight then, in anticipation of the MOTN awakening, I'll bust out a sketch pad and pencil, in case the scritch of a #2 on construction paper is more soothing than a half-interesting video.

Maybe I can make a buddy for this guy. 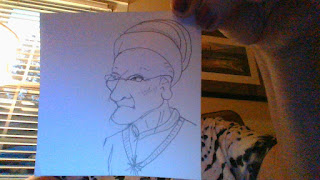