You may have heard a thing or 2 about the weather we've been experiencing here in the Triangle Region of North Carolina (just don't call it 'Raleigh-Durham,' because there's not a place by that name and we're not sister cities and each has it's own personality, so DANG!!).

Then some sleet, followed by rain, then back to snow, and in there things got really bad on the roads. Like, really really bad.

You may have seen the by-now iconic photo of the mess that was happening in North Raleigh with a car on FIRE and other strewn into ditches while pedestrians walked calmly among the mostly-stopped vehicles as they tried, and failed, to make it up a 2% grade hill. 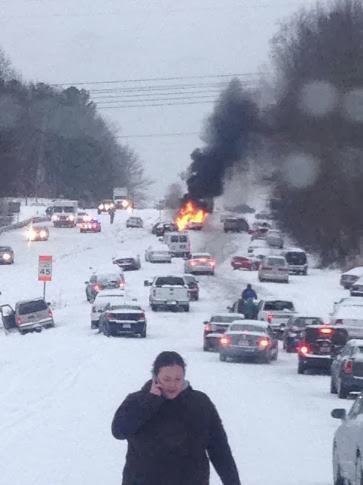 You have to admit, that looks pretty bad.  Chaotic, even.  That snow came down hard and fast and slippery onto roads that were well-chilled and uncharacteristically, we didn't as a region have that 1-2-hour window in which to drive home in relative safety after the snow starts to fly.  This was some purely uncivilized snow, folks, and threw the region for a real loop.

This was 4-6 inches of BADNESS, starting with a bang and ending with a meme.

It is to laugh.

An illustration of the hijinks that occurred on the road yesterday - over 100 reported accidents in the Triangle in the first HOUR after snow started falling.

Folks, people are all 'yuck yuck yuck' about Southerners driving, but that doesn't hold ANY water for me in this area particularly, because if you can FIND a native North Carolinean out on a snow they are either rushing to give birth or on their way to a basketball game.  There is not other reason to endanger yourself like that.

So, chew on that.  Whomever was out there driving was likely from 'The North,' proud of their track record, and boastful of their abilities driving in snow.  'Cept the NC snow isn't like Northern snow, it's slick and slippery and wet and somehow gummy, not the crisp fresh squeaky snow that generally falls north of Philly.

So, mock away, Redditors and FARKERs, those ignorant Southerners you call out in your better'n you posts about driving in wintry weather?  Mostly about y'all's families.